Merry christmas for EVERYONE

EVERYONE means it is not people who i know.

i know there are so many opinion about this event,
but i still like christmas because it support for happy thing,
gifts, lovers, KIRAKIRA, partys, drinking, and then i will sleep on the ground.
my thai friend said,
"oh, did you believe Santa Clous???"
and laught it,,,,
but you know, yeah, why not???
i dont know yet where am i this year,
but im sure, i expect some gift before i sleep.

In Nanglerng area, they has one traditional performance that is called "Lakuhonchatri"
This performance was famous and populer before, but now we cannot see so much.
In the future, I will reconstruct this show,  and so I start to reserch about "Lakuhonchatri"

☆Before "Lakuhonchartri"
The player dance and sing as pray for teacher.
"please come around us like a flavor, there will be so much pleasure like a river"

☆then start the comedy show which is talking about "Keaw" story.
Sometime they sing and dance in the story, for example Prince Pington sings about how did he come back to country.
"On the way, there are big storm~~~~" something like this.
but normally they play just as slapstick comedy.

☆Kuu-che is the only one woman who can tell whole story and play all charactor now.
We went to her house and heard about story.
That is long long looooooong story, it has 10 chapters.
and 1 chapter plays around 3 hours.
This time, I could listen only chapter 1,
but it is already toooo long!!!!
And I was so suprised that Kuu-che knows in detail about story,
So I felt that people can keep so much information like this, but it can be disapper too. 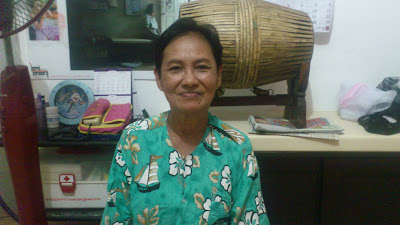 One angel wants to be born on the ground to find a soulmate.
In a law of heaven, angel cannot marry.
So angel was born in hey, but she has "house face".
Hermit who was find her is a monk(?) so he cannot touch her and take her out too.
Hermit give two old couple to baby, named "Keaw" which means glass in thai language.

The prince of the country was the name called Pington.
Prince Pington loves a kite a lot, so if someone get this kite when he lost, that one can ask one thing for him.
One day he played a kite, and a kite flyed away in the sky.
It felled in front of Keaw and she took it.
The bodyguards which chased after a kite asked her.
"Give it back"
and Keaw said,
"If I give you this kite, can I ask one thing? I want to marry prince Pington"
But prince didn't like her because she is ugly, so he invite to the palace but he never want to meet her.

His parents, king and queen also didn't like her.
So king ordered to her, "Let the mountain which inclined become vertically."
Keaw firstly exhausted about this and cried a lot then visited to Hermit.
He said,
"Don't worry Keaw, you are actually an angel before. you can put off your house face like a mask,"
and he told her how to transform to a beautiful woman and a man.
A beautiful woman is named Ma-ni and  a man is named Ma-nop.
Hermit also gave her a magical knife which can cut everything and a magical boat which can float in the air.
These two thing can be used only by Ma-nop.
So Kaew changed to Ma-nop and ride on the boat and floated up to the top of mountain.
Ma-nop had superhuman strength, so he pushed the mountain and carryed itself upright.
Then Keaw came back to the palace and said, "I did your order, king"

King was so disappoint about this, so he send his son to next country.
Prince Pington still didn't like Keaw, then he orderd one thing.
"Before I come back to here, if you are not a pregnant woman, I will kill you.."
So Keaw transformed again, then she forestalled prince's team.
And after she changed to Ma-ni, she started to bathe in the river.
Pington passed by boat and saw her. He falled in love with Ma-ni at first sight.
Every night he stayed with her.

After 3 month, king send a mail
"You can come back to the palace, Keaw is not here already. There are no trouble anymore."
Prince Pington gave three thing to her before his leaves.
1, three bamboo-joint which is filled with money
2, a belt
3, a ring
And she became pregnant.

On the way to back, big storm was coming for prince's team, they went to "Giant's bay" and a giant tried to eat them.
Keaw changed to Ma-nop to help him and killed that giant.
Then they went to meet queen of this kingdom.
She asked them,
"Who killed the giant."
The giant had two beautiful daughters which has the name Soyswan and Chunton, and Pington wanted to get them, so he said,
"Yes, I did."
And he got these two daughters.
Before they went to back to the country, Keaw showed her transformation to Soyswan and Chunton and she said,
"Don't tell about this to prince."

Prince Pington came back to the palace.  And then Keaw also came back with a baby.
He still wanted to get rid of her.
And he let his comedian servant talk about prince already married with two daughters to Keaw.
Keaw and a servant was good friend, so he met her and tell about this, but anyway Keaw already knew everything.
On the other side, two daughter was afraid about Keaw, and they telled the truth to Pington.
He didn't believe that and wanted to see her transformation.
So Soyswan and Chunton asked to Keaw to see it.
She said,
"OK, but I show you only in the closed room."
Prince Pington hided in the room, then watched that Keaw changed a beautiful woman who is loved before.
So prince tried to throw out her horse mask, but Keaw said,
"Don't do that, this mask would be needed in the future."

Posted by nong.met@gmail.com at 22:31 No comments: